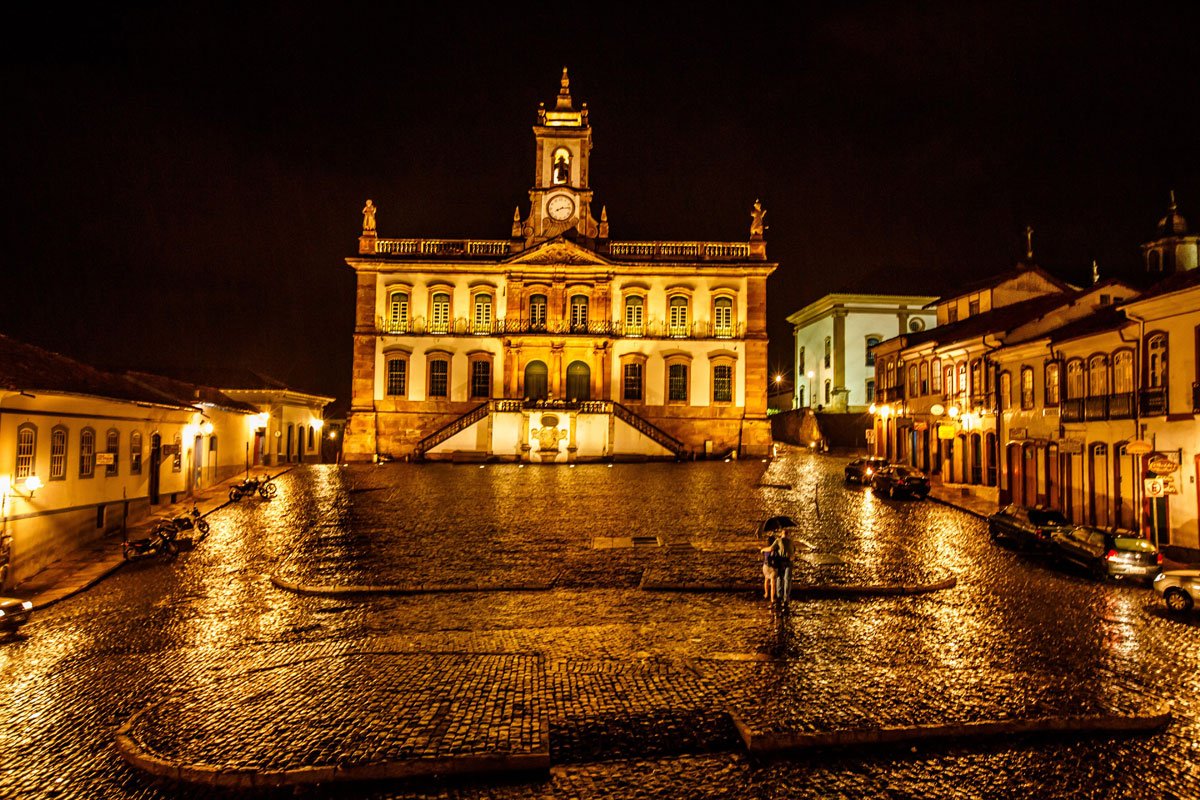 When mining companies struck it rich during Brazil’s 18th century gold rush, they paved the hilly streets of Ouro Preto with cobblestones and built stately red-tiled roof mansions and terraced gardens. Portuguese intelligentsia moved in, and artists and sculptors started a Baroque revival.

All roads lead to Tiradentes Square where you can find important public and private buildings such as the old Parliament House (1784), today the Museum of the Inconfidência, and the Palace of Governors, which has become the School of Mines and Metallurgy. The Sao Francisco de Assis Church, considered a masterpiece of Brazilian architecture, is also considered a masterpiece of collaboration between the genius of Aleijadinho, who carved the pulpit and altars from soapstone, and the painter Manoel da Costa Athayde, who painted the “glorification of the Virgin”, on wood in the roof of the main nave.

The former colonial mining town, tucked into the mountains of Minas Gerais, is now a UNESCO World Heritage site that’s been beautifully preserved. Many of Ouro Preto’s historic colonial mansions have been converted into charming pousadas and restaurants making Ouro Preto an ideal base to explore Minas Gerais’ other historic towns, such as Tiradentes, Congonhas, Diamantina and Mariana.

Besides the riches of art and architecture, Minas Gerais has vast quantities of aquamarine, topaz, diamonds, emeralds, kunzite, morganite and tourmaline making it one of the most productive gem-mining regions on earth. You can find these colored gemstones virtually in every boutique lining Ouro Preto’s main square, Praça Tiradentes. Further exploration can take you to Brazil’s oldest gold mine, where you can ride an old mining car through tunnels and see exposed quartz, graphite and black tourmaline. Since the mine was discovered, in the early 18thcentury, approximately 35 tons of gold have been mined there.

Another great draw to Ouro Preto is the traditional cuisine, which is literally a melting pot of Portuguese, indigenous and African influences resulting in many delicacies particular to the region such as Feijão TropeiroandTutu de Feijão. Homemade sweets and liquors, which are made from regional fruits, add a delicious end to a meal, always accompanied by local fresh farm cheeses.