Experiences > A Reunion Trip for…

A Reunion Trip for Four Couples

Organize a reunion trip for four couples that had formed a bond on their first trip together six years earlier.

The couples had different budgets; two were retired and wanted to limit out-of-pocket expenses, the other two were still working and more willing to splurge. Some preferred independent travel, while others were more comfortable on a guided tour. They wanted to see as much of Brazil as they could on a 16-day trip. Because they were wine lovers, a trip to Argentina’s wine country was woven into the itinerary.

Jill arranged an itinerary that included adventure, luxury, and urban and natural wonders – five well-chosen stops that mixed and matched the best of Brazil. Guided tours were followed by ample free time for exploration. All breakfasts and at least one other meal a day were included; suggestions were provided for meals on their own.

The trip began with two nights in Rio de Janeiro at a comfortable Ipanema beach front hotel with introductory tours led by an exceptional guide. They took an all-day city tour that culminated in a visit to Christ the Redeemer and later experienced the bohemian Rio nightlife in Lapa. In the Pantanal, the group spent three nights at an all-inclusive rustic eco-lodge, where they enjoyed morning and afternoon game drives.

Next, they flew to Iguacu Falls and they stayed within earshot of the roaring water in a Portuguese-colonial style luxury hotel. That was followed by two days in Buenos Aires, where they explored the city and its tango culture from a stylish boutique hotel in a trendy neighborhood. Their journey ended in Mendoza, Argentina, at an exquisite wine lodge and vineyard with views of the Andes Mountains.

It was a sublime ending to a perfect trip. 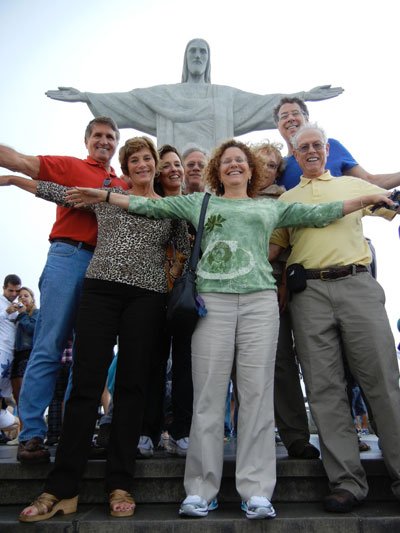 “Jill was incredibly patient and thorough in planning our reunion trip for eight friends with different agendas, and after close to a year of planning – and dozens and dozens of e-mails – we had a trip that satisfied everyone. The guides were superb and the transfers were seamless. The hotels were intimate and in the best neighborhoods for exploring, and the accommodations in the other places were top-notch. The trip was spectacular and we got to see a big chunk of South America. We all highly recommend Jill. She was thorough, knowledgeable, enthusiastic, and made the trip smooth so we could just enjoy ourselves.” – JOYCE AND TED EISENBERG